"We were milking 65-70 cows an hour. Now with the ADF System we are milking 85-90 cows an hour,” explains Parker Weiss from Hatview Dairy Farm Ltd in Alberta. 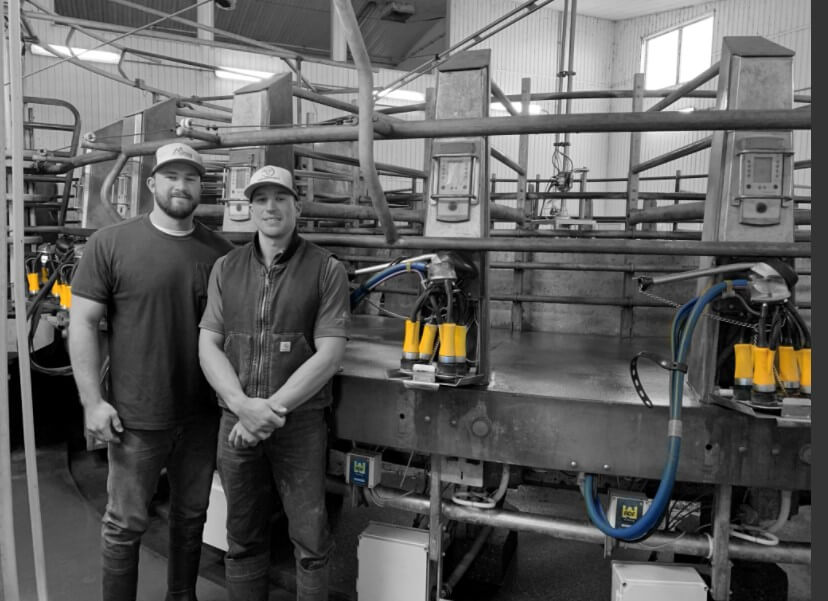 In October 2016 we installed the ADF System onto the 28 stall external rotary parlour at Hatview Dairy Farm Ltd in Alberta. Parker Weiss and his family decided to install the Automatic Dipping & Flushing system over a competitor due to our price, functionality and service. “The ADF System was easy to retrofit and was affordable,” he says.

Parker runs Hatview Dairy farm with his father Keith and his brother Quintin. The farm is currently milking 180 cows twice a day and they produce and average of 40 litres of milk per cow per day.

The biggest benefits of the ADF System they have seen is time saving and lower somatic cell count. “The way our dipping system was set up prior to installing ADF meant we had to keep the rotary at a certain speed. We were milking 65-70 cows an hour. Now with the ADF System we are milking 85-90 cows an hour,” explains Parker. “Our somatic cell count has dropped from around 200 average to 125 which is a brilliant result.”

The health of the dairy herd has improved which has saved the family money. “Our somatic cell count has reduced and there is less transfer of contagious mastitis. We have also seen a reduction in antibiotic use,” Parker says. “With regards to liners and iodine there hasn’t been much difference in cost as we change the ADF liners more often. However, we have fewer cases of high SCC cows resulting in less treatments and more quality milk in the tank – so there is large money savings from that.”

Parker’s cows think the Automatic Dipping & Flushing system is great. “They don’t even notice it’s there which is why we like it. Our staff also like the system. It’s one less thing to worry about for them. All they have to do is press the green button and go,” he says.

Parker tells us that the installation of the ADF System went smoothly. “In one day they were in and out. The engineers stayed for the first milking to make sure there were no issues and they came back a week later to check again. The guys at DeLaval and the ADF salesman Mike Armstrong went above and beyond. Props to the install team and Mike.”

“Overall the ADF System is affordable, easy to install and worry free and that’s why I would recommend it to other farmers,” concludes Parker.