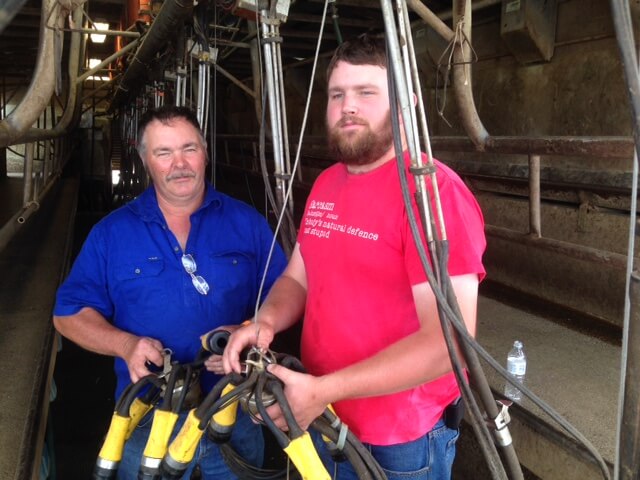 “We’re really pleased with the system, there are just no negatives about it. The cows have responded well to it and their teat condition is brilliant. My mother’s been milking all her life and she says she has never struck cows whose teat condition has been consistently so good.”

Milking 200 cows on his 190ha family farm, Adam says he had been looking for a solution that would improve teat spraying and help eliminate an ongoing problem they had with Mastitis in their herd. “We were looking for a way of preventing the mastitis being spread from one cow to another.”

The ADF system sanitises teats immediately after milking and sanitises the cluster between cows, reducing the risk of infection and Somatic Cell Counts (SCC).

“When I saw an advert about the ADF system I thought it would solve all our problems, so I followed up and had it installed in our swing-over milking shed. We’ve never had any issues with it, and we have a great relationship with our dealer Mick Scanlon at Scanlons Dairy Centre in Terang.”

Before installing the ADF system, SCC in the herd averaged around 300,000, just outside the premium range. Today, thanks to ADF these have dropped significantly to around 160,000, which was what Adam and his family were aiming for.

Adam is a third generation farmer on the family farm which he now runs with his parents Barry and Pam Edge. “My grandfather farmed here originally and my great grandfather had a farm just down the road before that,” says Adam.

Adam didn’t hesitate when he was asked to give a talk on ADF by the Rural Industries Skill Training, one of Australia’s largest independent vocational agricultural colleges. “I’m studying for a diploma in Agriculture, and when the tutors found out I was using ADF they asked if I would give an impromptu talk on it, which I was happy to do,” says Adam.

It’s been nearly four years since Adam had the ADF system installed on his farm at Laang in Victoria, and he is very impressed with what it’s achieved. “There is nothing negative about the ADF system, it’s brilliant and it works – it really is the best decision we could have made.”